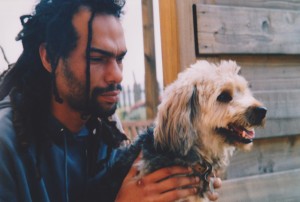 Martial was born on 9 June 1968. He died in August 2010, following a life of misery and turmoil. A foundation created in 2012, under the wing of the Fondation Caritas France, now bears his name.

Since 1992, when my partner and I first met him and until his death in 2010, Martial never stopped writing, to the point that he realized that it was the only thing he had been successful at in his life. As he was feeling very low and refusing to see a psychologist, I had incited him to write down what was worrying him and about his day to day life. I told him that I would write a book about his life. I bought him some excercise books which, once filled, he gave back to me. These represent around 10 000 pages in total. In 2008, his girlfriend having taught him how to use internet, he began to hold various blogs on Skyrock. There he talks of his love for Jah, of his rejection of Babylon, of the fight of Blacks for their freedom, of his desire to  go to Africa.

On this site you will find some personal extracts of his thoughts to give you an insight in the life of one, who was like others, considered in the eyes of many, a good for nothing or a bad guy. Despite great hardships and the terrors that haunted him, he strived to be a good guy, and he was, enamoured of justice, concerned about the poor, attentionate towards his friends, impregnated by the spirit of Jah despite times of doubt and anger. These writings composed by someone who had stopped his scolarity at the age  of  16, are the resort of intelligence and humanity, even when the powerful and the established of all walk of life incessantly belittle them, as assisted, non productive, irresponsible.

Apart from writing, Martial’s other passion was music, mainly dub reggae. Until 2005, living in Paris suburb, he was involved as a drummer in several groups formed by his brothers and other musicians. Then, having moved to a house near Bordeaux, he hoped to join a group or to create one but to no avail. Soon after meeting us, he expressed an urging wish to have a keyboard  (Yamaha PSS51). Afterwards Martial bought a drum kit and as soon as he was settled in the house, he reserved a room in order to set up a music studio which became his pride and joy. His hope was to be recognised as a composer, whose sound came straight from the heart. However, he never had the means to end up with a CD. The music composed or remixed by Martial in the last years of his life is a pure and subtle native music,  far from the frequent artifices in use today.